It is not the first time we have escaped the long, cold Berlin winters to visit Cornwall in late February, early March. We’ve had a whole week of mildest sunny weather, with lunch-time temperatures of 18-20°C enabling us to have fresh crab sandwiches and other seafood delicacies in the first of the season’s sunshine. We also experienced a week of grey, damp weather, where the thermometer would not rise above 6-8°C. What we never experienced is what has greeted us this year: Absolute winter weather, like we have not seen in Berlin all winter!

We are staying in a small fishing village just outside of Penzance, at the very southern end of Cornwall and have actually been snowed in since two days. No vehicle manages to enter or leave the village. It is beautiful watching the weather come and go over the sea, watching the mood of the water change from harmlessly still too angry, deep blue-green with huge foam sprays where the water hits the rocks. My carefully made plans to visit several of the Cornish gardens where at this time of year the first camellias, magnolias and rhododendrons should start to flower had to be shelved. Even if we had made it to them, the frost will have turned their magnificent flowers to a sad brown soggy mess. Luckily these gardens have a very long season, so other plants, not quite so precarious will soon continue the show. We had one lucky day. The only good day of the week we had booked the Skybus from Land’s End to the Scilly Isles, to visit Tresco Abbey Gardens. The Scilly Isles are a group of small islands about 6 km of the far south-eastern end of the British coast. Surrounded by the Atlantic Ocean, they benefit from a very mild climate, with winter temperatures above freezing, summer temperatures in the low 20’s. Inhabited since the stone age, the Isle of Tresco was also the seat of an abbey. Within the ruins of this abbey a magnificent garden was started in the 1830s and has successively been allowed to evolve and develop into one of Britain’s most special gardens.

Is this Britain, or are we in New Zealand or on Madeira? 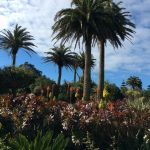 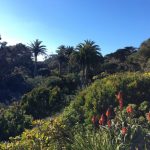 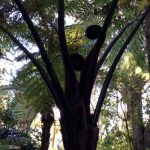 Mike Nelhams, the Garden Curator points out that if one were to be dropped into the garden blind-folded, it would be difficult to say where one is, as the garden hosts plants from such a wide range of different geographical regions with totally different growing requirements. There are very dry, sunny rocky borders where drought-tolerant plants such as aloes feel wonderfully happy, as well as cool, shady groves where stunning New Zealand tree ferns look like they may be hiding some ancient dinosaurs.

What for me makes it clear that this is a garden in the British Isles is its unique horticultural standard: a combination of a very wide range of unusual plants, being well planted and designed and immaculately maintained. Yes, there are some wonderful gardens around the Mediterranean Sea, but either they do not offer the botanical diversity, or the design or the standards of maintenance. The abbey ruins give the garden its basic structure. Some terracing has created sheltered, warm sunny planting areas for plants that like it hot and dry such as succulents, yuccas, agaves, and many unusual South African heathers. Within this formal structure pants are allowed to self seed. The self-seeders give the garden its unique laid-back atmosphere. Those that don’t get in the way of other more important plants are allowed to stay where they are, if not they are pulled out. Geranium maderense is one of these, as are the numerous Echiums. 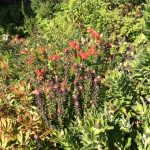 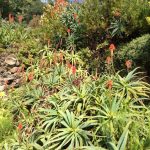 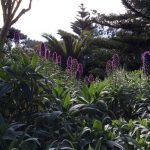 Mike and his gardening team do not stand still. Permanently on the look out for new plants to try out, they take part in seed exchanges with other botanical institutions and plant collectors. The propagating houses are full of seedlings and cuttings, amongst others about 70 different Banksias grown from seed recently obtained from another garden. Where we get excited about the first few signs of colour appearing in our gardens at this time of year, they have over 300 different flowering plants in the garden on new year’s day.

Over the years Mike Nelhams has learnt to be careful and not take the mild weather for granted. In 1987 severe winter weather hit the garden and snow was followed by frost and ice, causing huge damage to many plants. Many of the palm trees froze and numerous other tender plants did not survive. The clean-up of this winter was barely done, when in the winter of 1990 a heavy storm hit the garden, taking out much of its vital shelter belts. These tall evergreen trees that protect the gardens from the strong winds that batter the coastline were suddenly all gone. What we see today has grown up again in the past 25 years. 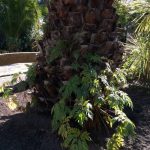 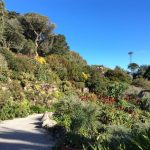 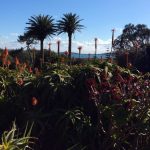 Despite these setbacks Mike continued the garden’s tradition of planting tender exotics. Knowing that a hard winter can come again simply has made him resolute in providing each plant with its ideal habitat so that it has the biggest chance of survival should it happen again. Nearly all trees are evergreen in this garden as their protective shelter is most needed at this time of year.  We hope the present cold spell will not leave a trail of destruction.

Do put this special place on your list of gardens to visit. It is well-worth the trip!