More Evergreens for the wintergarden 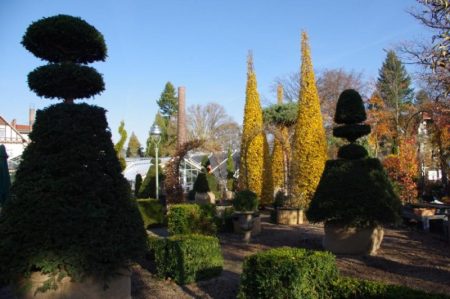 For the first Advents weekend I wrote about the evergreen shrubs in my small courtyard garden. However large or small a garden is, plants that retain their foliage during the wintermonths are invaluable, which is why I continue this advents series on evergreens with those that provide great structure.

From a design point of view, they give structure and create an important contrast in both form and colour. They also provide a valuable backdrop for other plants and help to frame views and vistas that will create depth.

The delicate flowers of witch hazel, red stems of fiery dogwoods or the crisp white bark of birches stand out and become much more visible against a green background.

On a more practical note, they provide privacy and year-round screening behind which nosy neighbours or ugly buildings can disappear. But perhaps the most important of all is that they make a valuable windbreak that help to provide shelter and create microclimates in the garden which enable you to grow more sensitive plants. 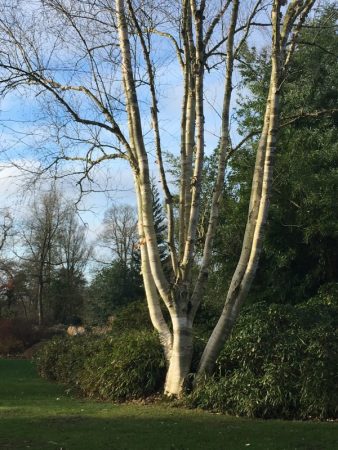 What is there to consider?

Apart from the winterhardiness, overall size or the suitability of soil and lightlevels, it is important to consider the shape, shade and texture of the leaves. Small leaves can appear untidy, whereas bold, large ones tend to add much more structure.

Colour plays a valuable role. Dark green as opposed to mid- or light green can work oppressive, especially when growing in a dark corner where little sunlight penetrates. Yellow foliage may not be to everyone’s taste, but in somber corners will give the appearance of sunshine and light. Do note though that some of the variegated plants, like holly or ivy, may not be as hardy as their green relatives. 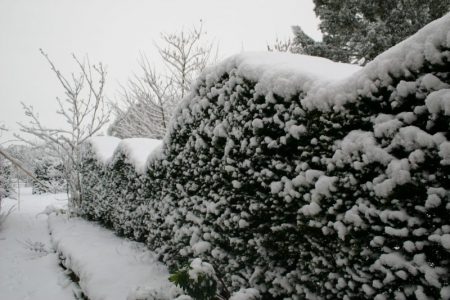 The surface of a leaf also deserves attention. Matt foliage tends to absorb a lot of light, creating a dull and dark appearance, to the point of being gloomy. Many conifers like Thuja and yew can have this effect. Glossy surfaces of for example holly and cherry laurel reflect light and can appear sparkly, particularly after rain when waterdrops enhance the effect. 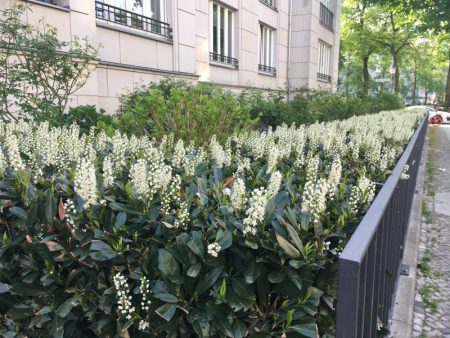 A number of plants are well suited to clipping into formal shapes: as a space-defining hedge, a structural form like a ball, cone or cube, or a more imaginative complex topiary shape.

Laurel is often used for hedging or as a large formal shape, but can be frost-sensitive in our part of the world. The hardier variety seems to be Prunus laurocerasus ‘Otto Luyken’ with a narrow dark green leaf. This also has a neater, more compact growth habit, which makes it ideal for low hedges or balls.

Hollies make useful hedges that will also perform in shady areas. Their prickly foliage gives birds valuable protection from predators, and the berries provide good food. The yellow-berried varieties will retain their fruits longer, as the birds expect them to turn red before they are ripe. (Sooner or later they find out that these pale ones are fine too!). Experiment with them as informal cloud hedges! Very hardy and attractive is Ilex meservae. Like most hollies, there are male and female-flowering plants, the females being the ones that carry the berries, but without a male in the neighbourhood, there will be no fruits. Ilex meservae ‘Blue Prince’ is needed so that ‘Blue Princess’ will be cheering up your Christmas decoration (and the birds) with their red berries. 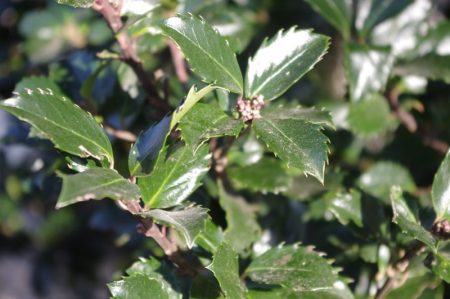 One of the best-known classics for clipping is Yew, though some people are worried about it being poisonous. Yews will make beautiful trees in their own right, but is my favourite for hedging and topiary. If well trimmed, it can have a razor-sharp edges that will look stunning in winter.

Evergreen azaleas can also be grown as a formally clipped hedge or a cloud hedge. In Europe this is seldom seen, but in Japan this is a common practice. If cut after flowering (but before mid-summer!) they will flower profusely. For those who find the pink colours too garish, they should try a white variety like the pure white ‘Palestrina’, though this is a variety with slightly larger leaves and relatively loose growth habit, making it more suited to a cloud rather than a formal hedge. 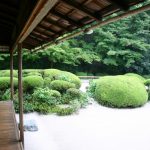 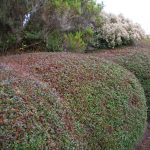 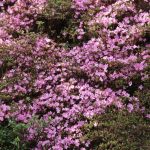 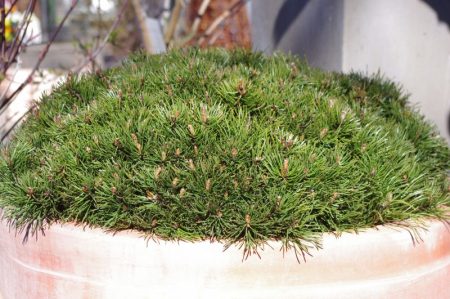 Most conifers are reliably hardy and evergreen and will cope with the most difficult of winters. I love our native pine trees Pinus sylvestris with their rusty-coloured bark and wonderful characterful personality as they grow older and mature. There are numerous pines, with varying characteristics. Seldom seen is Pinus bungeana of Chinese origin.  It has a decorative habit, but the main reason for planting this tree is its bark. They develop colorful patches as the bark flakes off, not unlike that of planetrees. For people with little space, there is the compact, shrubby form: Pinus mugo. P. mugo ‘Pumilo’ and ‘Mops’ are two cultivars that stay small, making them also suitable for containers on roofs and terraces. An unusual tree is the Japanese Umbrella Pine. Scyadopitis verticillata has just one, thick fleshy needle, instead of bundles of slender ones. Its colour is mid-green and glossy, so that it reflects much light. This is very popular at this time of year, and often used by florists. I love the soft needles that are rubbery rather than prickly like most others. 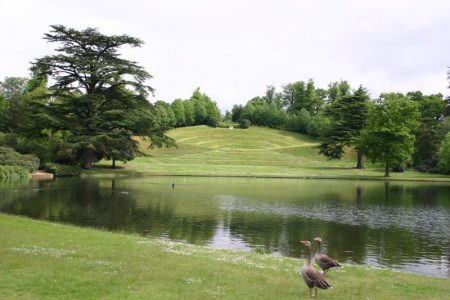 For serious impact in the landscape (no good in a small garden!) are cedar trees. They become beautiful, majestic giants. The three main species (Cedrus atlantica, C. deodara and C. libani) are easy to recognize by their silhouette. Note the first letters of each species: A, D and L. Atlantica has Ascending or upward-growing branches. Deodara has Descending or somewhat hanging branches, whereas Libani’s branches grow Level or horizontally. The most stunning of all, but sadly not for our north-European climate is C. libani, as seen in the photograph at Claremont landscape garden. 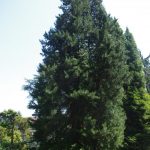 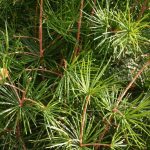 Rhododendrons and their relatives

This is a huge groups of plants, many of which are great garden plants if you have the right soil for them. As there are so many, I will dedicate my third advents article to them. The Evergreens that provide flower colour in late winter will be there for the fourth advent! Until then, I wish you all a wonderful time!