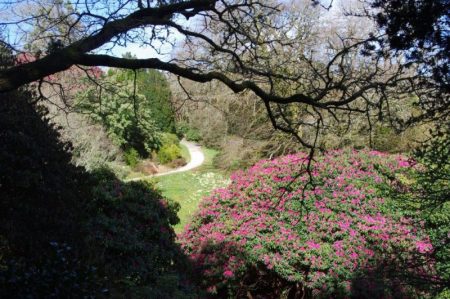 For the past two weeks I have been writing about plants that provide valuable green colour in our monochrome wintery gardens and mentioned the Japanese art of using azaleas as clipped evergreen structure. Azaleas are part of the ericaceous family which contains many plants that can be used to great effect, which is why they deserve an article just dedicated to them.

The Ericaceous family and their soil requirement

All plants are divided into plant families depending on their reproductive organs and flower structures. To the Ericaceous family belong 126 genera and about 4000 species, including about 1000 Rhododendron and almost 500 Vaccinium. It contains numerous hardy, valuable evergreen garden plants in all sizes, most of which prefer a cool, slightly shady position. The only requirement for most of them is that they have a light, acidic soil with plenty of leafmould and other organic matter such as composted pineneedles. A few will tolerate more calcareous soils like the winterflowering heather Erica carnea and the moderately hardy Strawberrytree. 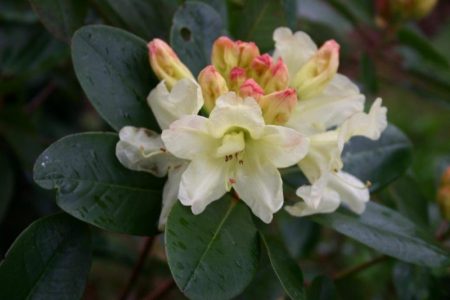 Like for most other plants, you can give them a good start in life by adding mycorrhiza to the planting hole as you plant them. They require a special type of known as Endomycorrhiza, which is best ordered via the internet, as it does not have a long shelf-life, and needs to be used within three months of purchasing. Especially when planting on nutrient-poor soils, the mycorrhiza will help to provide vital nutrients to the plants.

Which of the numerous species and cultivars of Rhododendron or Azalea to choose is difficult. There is much more to them than the huge lilac and mauve flowering mounds filling front gardens in the greener parts of Hamburg.

Much depends on the available space, the time of year you would like to have the plant flowering and, last but not least, which colour you prefer. Some, like Rhododendron dauricum, will start flowering shortly after Christmas, Rh. ‘Christmas Cheer’ will even flower before Christmas, whilst others like Rh. viscosum will flower in July (but note this one may be charming but is not evergreen!).

In recent years, some new hybrids have come onto the market that will cope with a more alkaline soil. The series is called Inkaroh-Scented Hedge and comes in various colours, such as ‘White’ and ‘Lilac’. 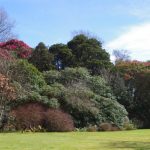 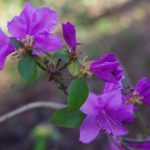 Rhododendrons for the smaller garden

If you have little space, there are some wonderful compact varieties. The small-leaved early flowering Rhododendron impeditum cultivars such as ‘Azurika’ or ‘Ramapo’ which often flower in March-April with their compact blue-violet flowers. The Japanese azaleas are also small-flowered and early flowering, and often flower with clear, bright colours in shades of pink and red. If the colours are too bright, the softer Azalea ‘Hinomayo’ or white ‘Palestrina’ may be your choice plant. In the larger-leaved types Rhododendron yakushimanum is a very valuable plant, reaching little over 1-1,2 metres in height, flowering mostly white, pinkish-white to cream colours, depending on variety. ‘Schneekrone’ Starts pink, opening up white. 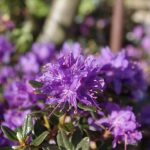 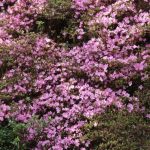 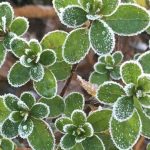 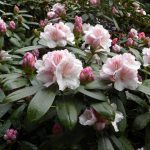 Several, like Rhododendron bureavii have the added bonus of producing attractive new shoots after flowering has finished, extending the season of interest, be it in a subtle way. One of my favourites is Rhododendron yakushimanum and its many hybrids. They remain relatively compact and have attractive new shoots that appear after flowering. These are covered by a thick fur-like layer of silvery or coppery coloured fine hairs called indumentum. This extremely soft felty layer will disappear from the upper side of the leaves by late summer, but remains on the undersides. ‘Silver Lady’ is particularly attractive with silver new shoots appearing as the white flowers fade. 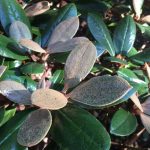 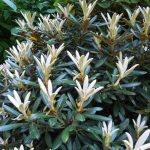 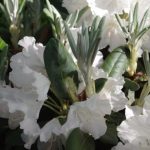 I will not bore you with all 126 different genera, but there are a few more worth considering for the garden.

Pieris japonica is another member of this valuable plant family that produces attractive new shoots after flowering in spring. These shrubs have a very neat, well ordered growth habit and are well suited to plant in smaller gardens in partial shade. Although mostly white flowered like ‘Browers Beauty’, there are some new cultivars on the market with attractive pink flowers like ‘Katsura’ or even darker ‘Passion’ and some have dark red new shoots.

Leucothoe fontanesiana is interesting as being one of the few with a particularly attractive growth habit. It produces short runner from which emerge new shoots that will gently arch giving an elegant appearance. At the tips the clusters of small bell-shaped typical flowers appear in early summer.

I am particularly fond of Kalmia latifolia whose pale pink flower buds are as pretty as its flowers. It will grow into a low compact dark green mound. ’Pink Charm‘ and ‘Schokra‘ have pale pink flowers, whilst ‘Nani’ has a dark red rim.

A small and pretty family member for more open positions is Andromeda polifolia which can reach max. 40cm and increases by producing short runners.  The variety ‘Blue Ice’ has small pink flowers that complement well its greyish, almost needle-like leaves that give it the appearance resembling that of a lavender or rosemary.

If you have a boggy area in the garden, you could also try Ledum groenlandicum. This spreading plant is still occasionally sold under its old name Rhododendron, the species can grow up to 1 to 1,5m tall, though the variety ‘Helma’ remains much more compact and garden-friendly. Its needle-like foliage is slightly scented. In Mai tufts of white flowers appear. 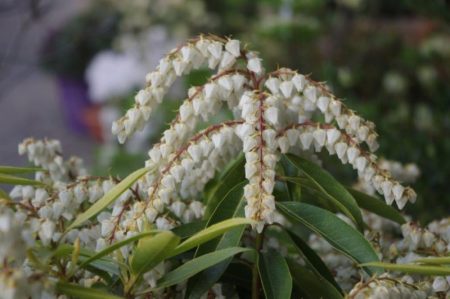 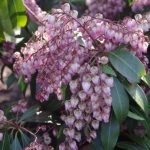 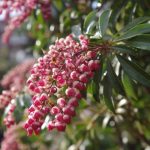 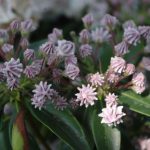 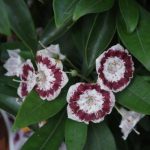 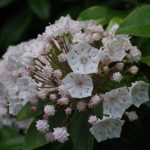 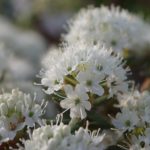 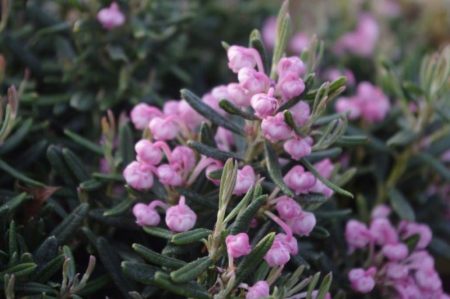 I could add many more, like the heathers and blueberries (though these are not evergreen) and give much more detail, but it is not a book I am writing. This is just intended to prod you into doing a little more research for yourself, exploring this interesting group of plants. As the shortest day of the year approaches, and the weather cold and damp, it is a good moment to sit down, light your third advents’ candle and read further. But don’t forget, as long as the soil is not frozen, you could still do some planting!