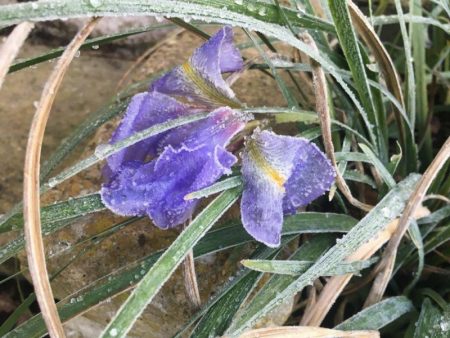 Zur deutschen Version – May I firstly wish you a happy New gardening Year. I hope 2020 will be a floriferous one! It seems odd to think it is the start of a new year, and yet the temperatures outside are so mild, it feels like spring. Last night as I left the Garden Academy it was almost dark, yet I could hear the blackbirds still sing their cheerful song, full of the promise of spring. 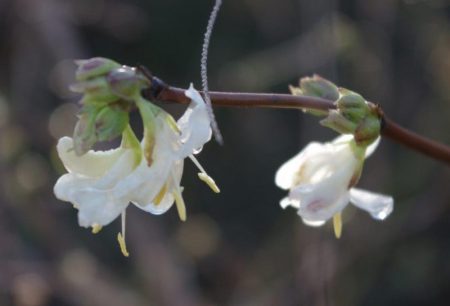 Before Christmas the deliciously scented little cream-coloured flowers of Lonicera purpursii opened. Each morning as I leave my flat, I walk under a cloud of snowflakes of the winterflowering cherry Prunus subhirtella ‘Autumnalis’. 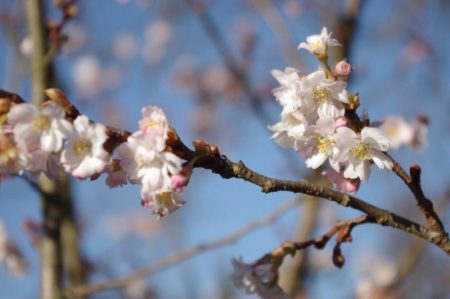 Of course the pink Viburnum x bodnantense ‘Dawn’, Jasminum nudiflorum with its cascade of yellow flowers and numerous delightful  Which hazels (Hamamelis) have also long started flowering. When you look further down, the first Snowdrops have made an appearance, and are starting to spread their white petals, like a ballerina elegantly but slowly lifting her arms. The cheeky little pink buds of Cyclamen coum are also slowly unfurling themselves. Bliss! 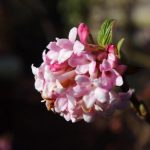 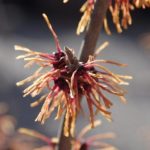 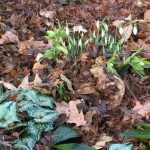 These mild winters we’ve enjoyed these past few years have made me more bold trying out plant which 10 years ago I would not have considered possible here. I had brought  a clump of a favourite Iris out of my parents’ garden in Belgium which is not supposed to be hardy. Thea divided it and planted a row of them in the narrow border along the south-east façade of the Roothouse. This is one of those typically difficult dry strips, where most plants struggle as they have little room to spread their roots, and tend to be very dry as the rain does not always reach there. The added problem in our case is that during the summer months the terrace is full of plants, casting a lot of shade and hiding whatever tries to grow there from sight. 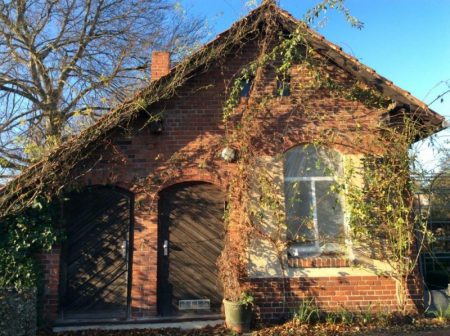 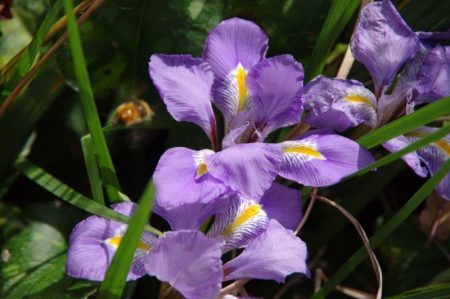 In English known as the Algerian Iris, in German called the Kretan Iris, it originates as both these names indicate, from the eastern Mediterranean and North Africa. In it native habitat Iris unguicularis grows in light woodlands or on rocky cliffs. It produces relatively narrow grey-green leaves that are evergreen, and approximately 50 cm long.  These can look a little scruffy during the summer months, when it has a period of rest, though Its rhizome enables it to survive long periods with little or no rainfall. Do not expect a big show of flowers, but instead, between November and March, tucked between the leaves single flowers appear one after the other. Deliciously scented, the larger, lilac blue flowers keep appearing throughout the winter months as long as there is no serious frost. Every time they are a delightful surprise. Instead of a proper flower stalk, they have a very long perianth, measuring up to 25cm long that come up from the root, but can still be picked for the vase. 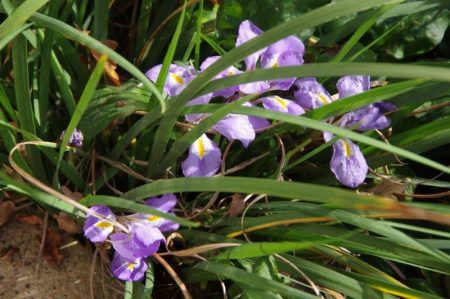 What does this plant need? Nothing! It thrives on neglect and poor soil. It seems to love its new position below the window of the roothouse, where the soil is poor and often dry and where they are deprived of valuable sunshine during the summer months. As they naturally grow on rocky ground, in countries where summers are hot and dry, and will also thrive in light woodlands, they seem to have found themselves very much at home and have been producing their modest but delightful flowers one at a time. Avoid very windy spots, as the relatively large petals are very delicate and can quickly look battered by rain and wind, and small slugs can be a pest, nibbling away at these delicacies!

During this dark season, these small wonders of nature never cease to amaze and delight me. Long may these delicate Irises continue to brighten up my winter days!