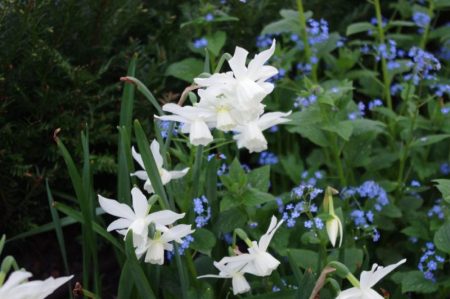 zur deutschen Version – Easter is as much symbolised by bunnies, chicks and eggs, as it is by daffodils. Their cheerful yellow trumpets herald the arrival of spring. Although they are not the first spring bulb to flower by far, it is together with the Crown Imperials the first large flower of the season to carpet our gardens.

The unusually mild winter enabled them to start flowering early. At the start of March the first yellow touches appeared along Berlin’s streets. ‘February Gold’ was almost true to its name, and started flowering just after the end of February. My worry that they would be finished flowering by the time Easter comes was unfound. The cold nights these past weeks put a brake on their flowering urge, so that we have been blessed by an exceptionally long flowering season. The later cultivars are only just now coming into flower. 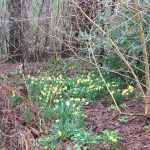 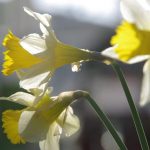 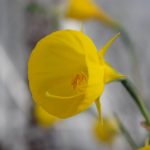 Many species originate from southern Europe and north Africa. They normally flower at the start of spring, between late February and late April, though a few rare species are autumn flowering.  Seeing meadows with large drifts of Petticoat Narcissus (Narcissus bulbocodium) flowering in the Iberian Peninsula is  stunning, but the sight of N. pseudonarcissus ssp. lobularis, our wild daffodil often growing in light shade, is equally breathtaking. William Wordsworth famously summed up the beauty of these wild daffodils after a walk in the Lake district in a poem, first published in 1802:

“I wandered lonely as a cloud
That floats on high o’er vales and hills,
When all at once I saw a crowd,
A host of golden daffodils;
Beside the lake, beneath the trees,
Fluttering and dancing in the breeze.”…

The majority of our Narcissus cultivars prefer to grow in full sun to partial shade and like a well-drained soil. When gardening on heavy clay, add some extra grit or coarse sand to improve the drainage. Avoid planting where an irrigation system runs throughout the summer.

Like nearly all bulbs, make sure you plant them deep enough. Most large varieties should be 15cm or deeper in the soil. Plant them as soon as you buy them. The quicker they get into the still-warm soil in the autumn, the faster they can make new roots and get established in their new home.  Particularly on nutrient-poor sandy soils will they benefit from an annual dressing of organic matter, in form of compost or leafmould and a sprinkling of bulb fertilizer when they come into growth will help them build up energy for next year’s flowers.

The bulbs contain alkaloids such as Lycorine which is toxic to humans. Galantamine has found its way into modern medicine and is uses as a drug to treat Alzheimer dementia. 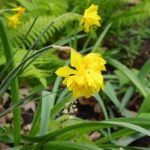 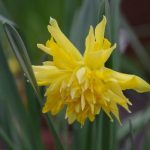 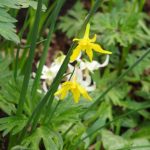 They gained in popularity in the 16th Century, and can be seen depicted in the earliest floras. The special forms were popular in the gardens, the common, wild forms would be sold as cutflowers.

Particularly the unusual forms, such as the double ones were in high demand for the collector. The scented Narcisus x odorus ‘Double Campernelle’ is one of these special forms, as is the single version N. x odorus ‘Single Camperenelle’. Their popularity continued. The filled short variety ‘Rip van Winkle’ is a cultivar that originated in 1884.  By now there are about 24.000 different cultivars in a wide range of forms and colours. 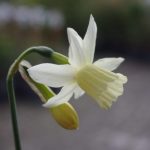 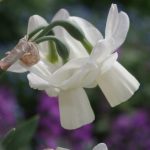 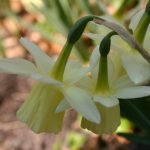 For those of you with an allergy to yellow, there are plenty of white, creamy or lemony white cultivars to choose from. Narcissus ‘Thalia’ and ‘Curlew’ are two favourites of mine I like to use where yellow really is to be avoided. Planted in larger numbers in amongst early perennials such as the airy blue Brunnera they create a wonderful effect.  N. ‘Elka’ is a delightful variety with just a hint of palest lemony yellow in its multi-headed flowers, as is slightly darker ‘Lemon Drops’. 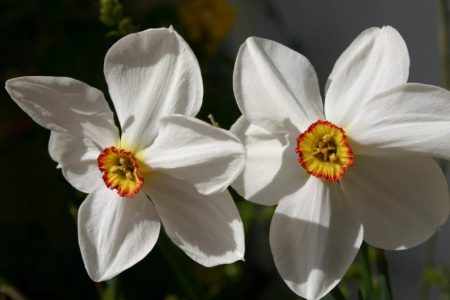 Of course great classics are the poeticus-types that come along towards the end of the daffodil season. Their elegant white tepals frame just a small corolla, shaped like a mouth that just forms a surprised “oh!”. This is darker orange red, hence they are often referred to as pheasant’s eye. The elegant variety ‘Polar Ice’ is pure white and looks stunning amongst pale pink tulips such as ‘Lavender Dream’. 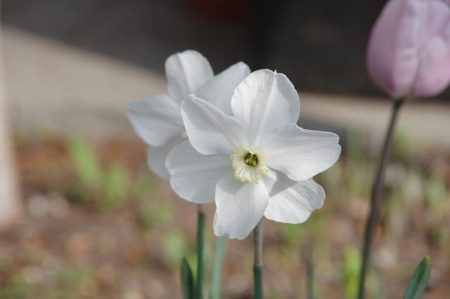 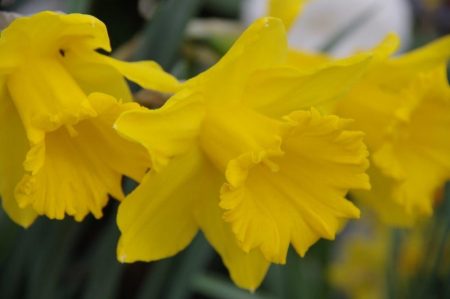 Right now I have a large pot of ‘Dutch Master’ on my terrace. They are the typical daffodil a child would draw. Bold and yellow, radiating pure sunshine into my garden. At this moment I find it glorious, and enjoy it every time I look out. Its big, bold character makes them also suited for planting in large drifts in an area seen from a greater distance.  Earlier flowering, more modest in size, but even more intensive in colour is ‘Orange Queen’. The name is misleading, as this bulb flowers rich, deep yellow rather than orange. 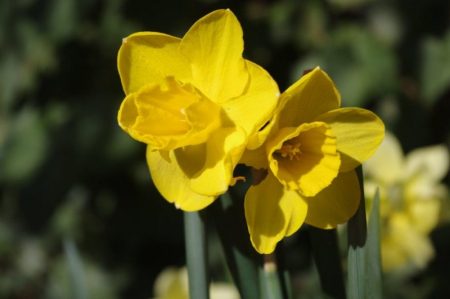 This particular group of narcissus I love greatly because of their flower shape: Their tepals are folded back, their corolla pointing eagerly forward. ‘Jetfire’ is quite a small one, whose corolla is a clear, cheerful orange, with shortish tepals folded back as if facing a strong wind. Similarly struggling into the wind is ‘Peeping Tom’ with its long, elegant Corolla, that look as if they greet you every time you enter the garden. 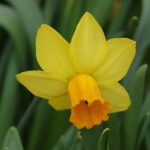 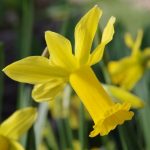 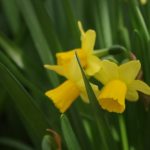 Belonging to the above group, N. ‘Tête-à-Tête’  is probably one of the most popular ones in flower shops at this time of year. Out of one bulb several short flower stalks arise, each one carrying two or three perfect mini daffodil flowers. Even though they are perfect to plant in containers for the balcony or terrace, they are equally suited  to a life in the garden . For those liking the unusual, there is ‘Tête Bouclé’ with slightly frilly, double flowers. 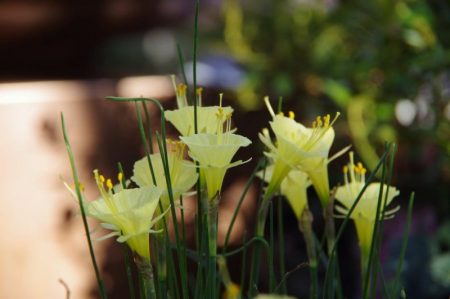 The petticoat narcissus N. bulbocodium ‘Julia Jane’ is delightful in a pot mixed with other delicate early bulbs, as you can observe the details of this dainty flower close by. Also N. ‘Cocopelli’ is one worth having close by in a pot: it’s scent is heavenly!

Enjoy this opulent bulb season, and make sure you make a note of those you want to plant more of, or add to your garden next autumn! 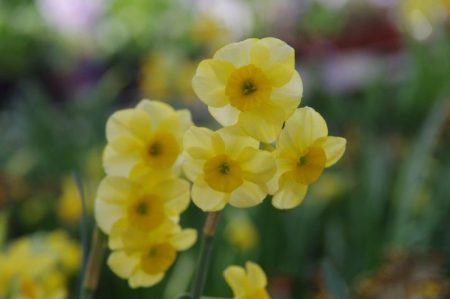 Tired of your too dry borders?

If the heat and drought of the past two summers have caused you to despair with your beds and borders, that you want to start all over again with a scheme that works, help is available. Petra Pelz, one of Germany’s leading planting specialists, known for her beautiful planting schemes at many of the garden festival sites across Germany, has just launched a special online course that enables you to design your own sunny, drought-tolerant flower border. Don’t wait too long: the closing date to enroll for this course is 21st April. 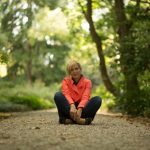 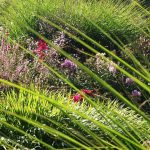 Wishing you all a happy Easter!