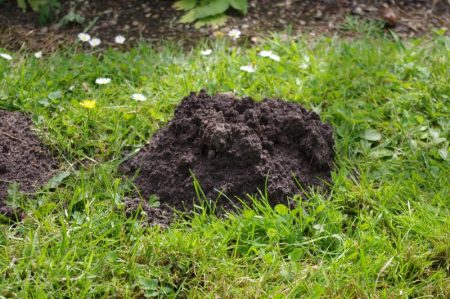 Zur deutschen Version – Few gardeners will ever qualify to become a Buddhist. On numerous occasions I have had murderous thoughts. I have been annoyed by slugs eating treasured plants, even devastating entire lettuce crops. Vineweevil grubs that sneakily eat away at the fleshy roots of my favourite auricula primulas frustrate me. But most dispiriting of all are destructive voles: Like the damage inflicted by vineweevil grubs, one does not see the destruction caused until it is too late. The disappointment is huge when the eagerly awaited springtime bulb display does not appear, or you find that as the snow finally melts, the roots of the ornamental grasses haven been shaven away. I have seen long-established fruit bushes keel over as the roots were missing, and mature apple trees die. 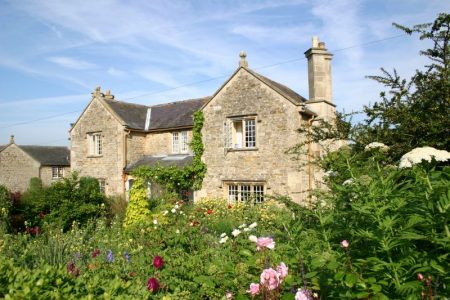 Voles threaten the most beautiful garden

It can be difficult to tell the difference between these two creatures that cause havoc in beds and lawns. Both dig underground tunnels and create little soil heaps which make paths uneven and lawns unsightly. Moles are comparatively harmless as they are meat eaters.  They feast on earthworms and other soil-dwelling creatures. Voles on the other hand are vegetarian. They love tasty, fleshy roots such as carrots and tulips but also have a soft spot for roses and many herbaceous perennials. Under German law moles are protected and it is forbidden to kill or disturb them, whereas voles may be eradicated.

How do you tell the difference between moles and voles?

It rare you see the creatures, and when you do, they tend to be so fast that you don’t have time to notice much details. Moles are larger, dark grey-black in colour and have rather sweet-looking pink paddle-like paws they use for tunneling, whereas voles look much more like a mouse.

It is easier to tell the difference by looking at the heaps: that of a mole tends to be higher and conical, whereas a vole’s is flatter, more spread out and often contain plant debris.

Vole’s tunnels are narrower, more upright, devoid of roots, those dug by the paddling feet of a mole tend to be wider than high. Put a piece of carrot in one of the tunnels: if it gets eaten you’ll know your guest is vegetarian.

How to deal with them

If they are in your garden, they often are an eternal problem – one couple can produce as many as 100 offspring in a year, as the babies become sexually active one month after birth… The moral of the story: start your eradication campaign as soon as possible.  I used to have cats with a good hunting instinct, that kept sharp-teethed pests like rabbits and voles at bay. As the cats got older, I noticed the damage gradually increased. I can imagine that certain breeds of dog may also be effective at catching the little critters.

You can set traps, baited with tasty carrots, or I find a cooked potato also works. There are live traps, which are more humane, but leave you with the problem of where to dispose of the unwanted garden guest. You cannot throw him (or her) across the fence – they will come back and it would severely damage neighbourly relations. We use a guillotine-like contraption which is inserted into the tunnels. It is quite effective, and is fast and painless. Ordinary mousetraps also work.

There are various noise contraptions, mostly battery-operated, that you insert into the ground that are meant to disperse them. They produce a high-pitch or a buzzing sound which apparently they do not like. I find these extremely irritating, and the animals do not really seem all that bothered by them. A robot mower can also work, as it is constantly on the move and causes vibrations in the soil. However this may be more effective at chasing moles out of your lawn, than voles in the middle of the border. There is also poison, though this should really be a last resort. I have heard of somebody regularly fishing drowned voles out of her water feature. Despite an animal-friendly ramp, that helps hedgehogs, mice and other garden visitors to escape the water, voles never seem to manage and drown. I have also heard a client praising small solar-powered garden lamps, that provide faint light at night, which assists owls in their search for food.

Whatever you use, it is best to wear gloves and avoid contact with trap and bait: they have a very good sense of smell! 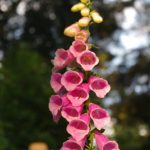 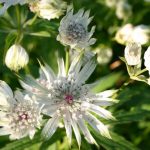 Over the years I have been experimenting with various plants in a garden that is particularly infested with voles. Looking at the original plan of the herbaceous border, very few plants survive. Catmints, ladies mantle and Geranium ‘Rozanne’ are still there. The roses are trying hard. Phlox is also still there, but lovely asters like A. frikartii ‘Mönch’ has long gone. I keep experimenting. As a new plant goes in, an old one gets eaten away. Although I tend to see the disappearance of a plant as a positive thing, as it makes space for something new, in this case, my patience is wearing very thin. 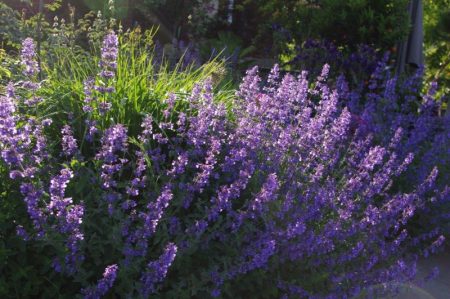 Rethink your approach to planting in vole-infested gardens 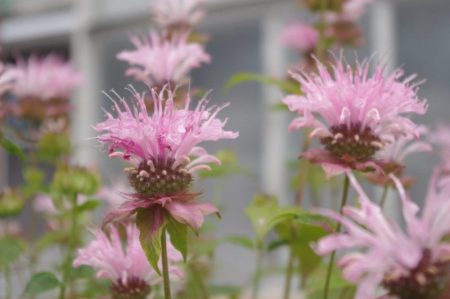 I have learnt that the plants which under normal circumstances could become troublesome are ideal in these gardens. Self-seeders and runners stand the greatest chance of survival.  There are numerous opportunists that like to self-seed in vacant spaces. Foxgloves, Welsh Poppies, Astrantia, Thalictrum, Aquilegias and Hollyhocks will germinate in gaps and fill the spaces. With runners I mean plants with invasive rootsystems. These have a better chance of survival. Several asters will oblige, as will Leucanthemella serotina and Monarda. 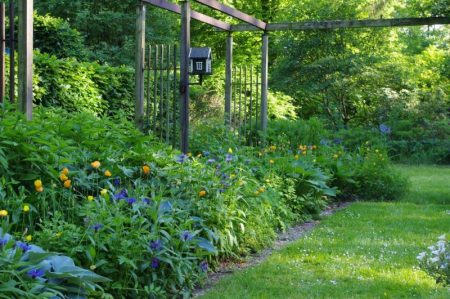 Not this list is not definitive, and I do not guarantee they will never touch them. After all, us humans do not all share the same taste either!

(*means the plant will tolerate a shadier position) 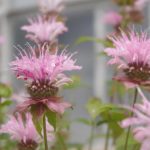 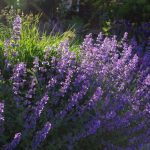 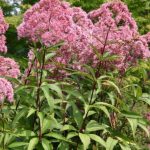 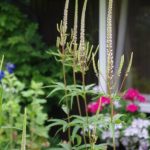 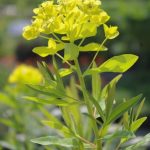 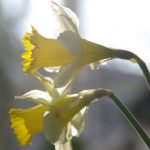 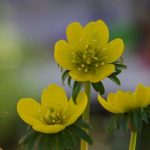 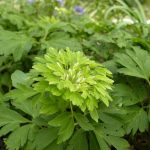 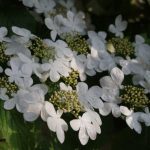 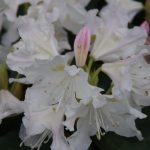 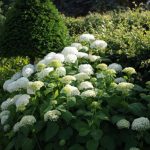 What about roses in vole-infested gardens?

Roses are difficult as they seem to taste particularly good. We have observed voles jump into the wire cage used to protect the roots of a freshly planted rose. 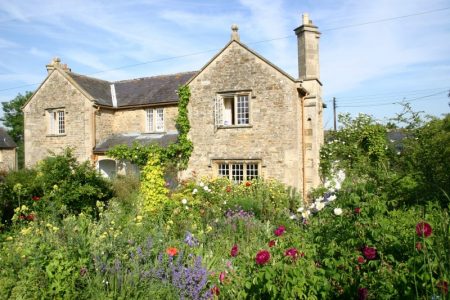 The same rule seems to apply to roses as for perennials, those that sucker stand a better chance. 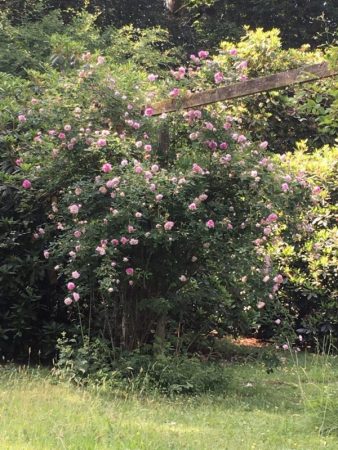 We have an lovely old (sadly nameless) variety, once flowering and strongly scented, that thrives despite the fully hollowed out soil. The voles, rather than killing it, keep it in check and stop it from spreading all over the garden.  I can imagine that the beautiful historic rose  ‘Charles de Mills’ which I adored until I discovered what a pest it had become as its roots spread all over the border, would be perfect. The sweet little spinosissima varieties and the beautiful repeat flowering ‘Stanwell Perpetual’ should also be worth a try. 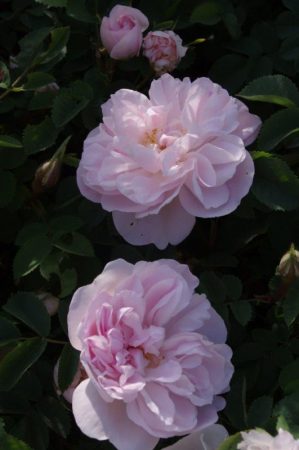 I can understand people’s despair at such vicious attacks on their beloved plants. Feeling helpless as they watch their hard work being destroyed. But do not despair. Do not give up. Take stock of what works and develop this, rather than trying to achieve the impossible. Good Luck!