I am upset that the tulip season is virtually over, but for that the gorgeous Allium season has started, and with these dancing drumsticks come also the first perennials at the Garden Academy. In my own leafy green garden, there is a sprinkling of starry pale pink flowers from the Montia sibirica that self-seed themselves each year in slightly different places, as do promiscuous Aquilegias and the delightful soft orange flowers of Meconopsis cambrica.

Unlike most poppies that are absolute sun-lovers, this close relative is a great plant for the shadier garden. They flower for many weeks and will self-seed. I planted one a few years ago in my garden, and this year I have encountered a dozen seedlings scattered around. Like many of these opportunists, they are easily removed when unwanted. The most commonly seen forms are either yellow or orange, but there is also a rarer red form Meconopsis cambrica ‘Frances Perry’. Originating in the British Isles and Northern Spain, this plant has naturalised in Germany.  It is the only European relative of the very desirable (but very petulant) blue Himalayan Poppy Meconopsis betonicifolia.

The poppy family, Papaveracea, is my favourite plant family with many wonderful, characterful garden plants. Whilst the Welsh Poppy above is a humble but delightful plant, its big cousin, the Oriental Poppy or Papaver orientale is big and loud and will dominate any border. This plant originates from Iran, Eastern Turkey and Kaukasus and is used to hot dry summers. Their very deep roots will go in search of ground water, and they protect themselves by having their resting period during the height of summer. 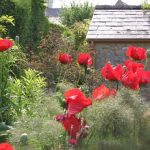 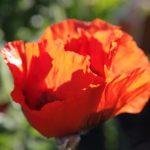 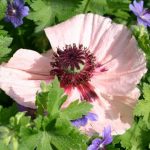 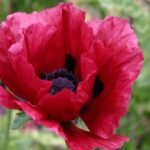 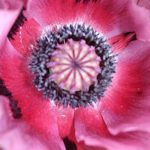 Regrettably there have been some disease problems in recent years, so if you have good, strong plants of Oriental Poppy cultivars in your garden, it is best to avoid buying new plants so as not to contaminate them. Alternatively, try the apparently resistant Papaver bracteatum, the Iranian or Persian Poppy. This is a very similar close relative originating from Iran, Azerbaijan, Turkey and Armenia. It is slightly taller, and has large black blotches at the base of the petals and looks very similar to Papaver ‘Beauty of Livermere’. 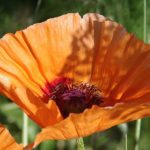 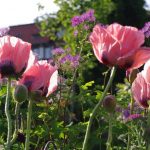 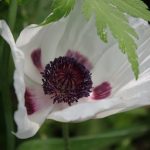 Growing on volcanic slopes in subpolar Europe, Asia and North America, often in gravelly, well drained soil, this plant does not like hot summers. It is a perennial, but in our climate mostly behaves as a biennial plant. Their growth habit is rather lax up to about 30cm. In the garden they rarely attain the long flower stems we find in florists, where they are sold as popular cutflowers. They come in cheerful bright colours, ranging from white to yellow, orange, red and pink. If you want to put any poppy in a vase, always scorch the base of the stem in boiling water, or hold it briefly in the flame of a candle.

Even non-gardeners are familiar with Poppies : Papaver rhoeas is our wild red poppy often seen in early summer along roadsides in recently disturbed patches of soil or in fields where the farmer has ploughed more deeply than normal. Their cheerful bright red colour, combined with the papery thin texture of their four petals make them appear bold and delicate at the same time. Over the years wonderful selections have been made by various gardeners, generally grouped together under the name “Shirley Poppies” after the village where they were first noticed.

Similar in colour and texture, usually a little smaller is the Ladybird Poppy: Papaver commutatum. The large black dot at the base of each bright red petal remind you of ladybirds. These too come from Iran, Turkey and the Kaukasus region.

Taller and therefore well suited to a border is Papaver somniferum. The seedpods of the Opium Poppies grown by drug barons have little resemblance to the much smaller seedheads of the poppies found growing in North European gardens. Your intake of opium will be higher after having had poppy seed rolls for breakfast, than anything you can harvest in your own garden.

Finally, another relative of the poppy family, that loves to grow in open ground in sunny areas is the Californian Poppy Eschscholzia californica. 2019 was a bumper year for these cheerful orange to yellow 15-20cm tall growing poppies. Weather conditions were perfect for them in their native Californian environment, so that the hillsides were carpeted with their fiery orange flowers. As the sun goes down, they close their flowers, giving them their popular name in German and Dutch of Nightcap.

I hope you find a little space for at least one of these delightful flowers that make you happy at the sight of them. They may not last for very long, but the few days the individual flowers are present, they never fail to cheer me up. The anticipation of watching the big, fat hairy buds of the Oriental Poppies as they pop open, or observing the attractive rounded seedheads as they mature and ripen will largely extend the season of pleasure. But remember: If you see tempting seedheads in a garden, always ask before you take one – it is so upsetting seeing stalks left standing in a border where people have stolen the seedpods. Especially when you know that they will never germinate, as they usually are taken too early.